120 people from across Milton Keynes gathered for a short cycle ride through the city centre to celebrate MK’s new city status and recent increases in cycling to school and work in MK (see Cycling CitizensMK project and event trailer).

The ride was organised by Cycling CitizensMK, a project funded by MK Council. The riders included MK Councillors, business and school leaders, primary school pupils, teenagers and vintage bicyclists in their 70s.

Charlotte of MK Youth Cabinet said: “I really enjoy cycling with my friends, I just find it’s an easy way to get around.” 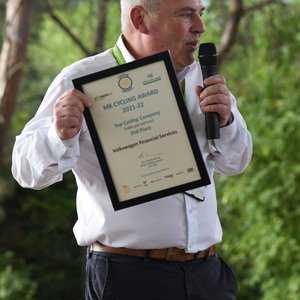 Cycling is a Council priority, it goes to our cycling strategy and our target to halve our carbon emissions by 2030. We’ve long been a supporter of cycling. We’ve got over 300 miles of redway network. Cllr Mick Legg, Deputy Mayor of Milton Keynes

“For us it’s a real win-win,” said Richard Scott of Volkswagen Financial Services, winner of the award for large company with the highest number of cycle trips per employee. “Cycling is good for our colleagues’ health, not only physical but also mental health. Our group cycle rides in the evenings help camaraderie, bringing colleagues together.”

MK Council’s Highways department received a Special Thanks award, presented by Dylan Murray, Deputy Member of Youth Parliament MK South, and collected by Andy Dickinson, Client Services Manager of MK Highways. “Without your hard work maintaining our roads and redways,” said Ian Revell, “none of us would be able to cycle in MK.”

Former Mayor Cllr Mohammed Khan told the riders how proud he had been to see city status achieved during his time as MK Mayor and how important cycling was to MK’s vision of itself as a city.

The awards were preceded by a short performance from MK champion break dancer Kevin Kallon and hot snacks from Namji’s Restaurant were served during the awards presentation.

The award winners (photos below)

Special thanks to MK Development Partnership for permitting use of the area outside The Old Bus Station and Ringway Infrastructure Services for providing cones and tape to mark the area off for safety.

Future rides. Cycling enthusiasts meet for a short ride through CMK every Thursday 5.30pm. Just show up at The Old Bus Station.