Back to citizens uk: birmingham updates

We offer our congratulations to both Andy Street on your re-election as the Mayor of the West Midlands and to Simon Foster as our new West Midlands Police & Crime Commissioner. Our commiserations in particular to Liam Byrne & Jay Singh-Sohal as all four of you attended our Pre-election Assembly sharing your pledges and insights into making our families better off, our communities safer and build a region of welcome.

We look forward to working closely with both elected leaders mandated to drive the recovery of the West Midlands from the pandemic and to build a more prosperous, fairer & safer region. 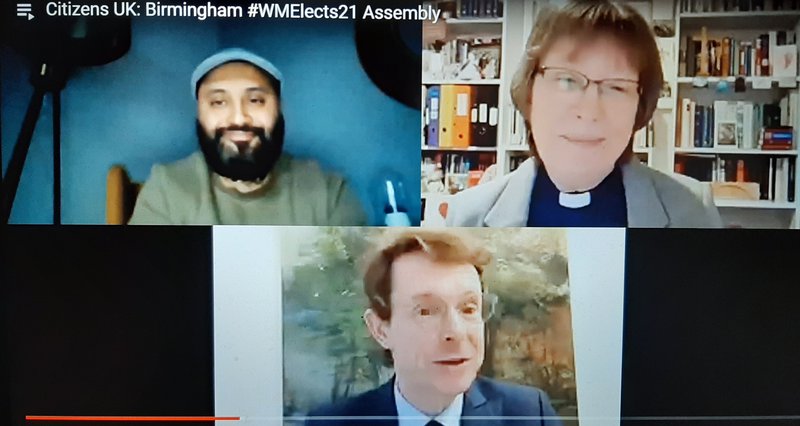 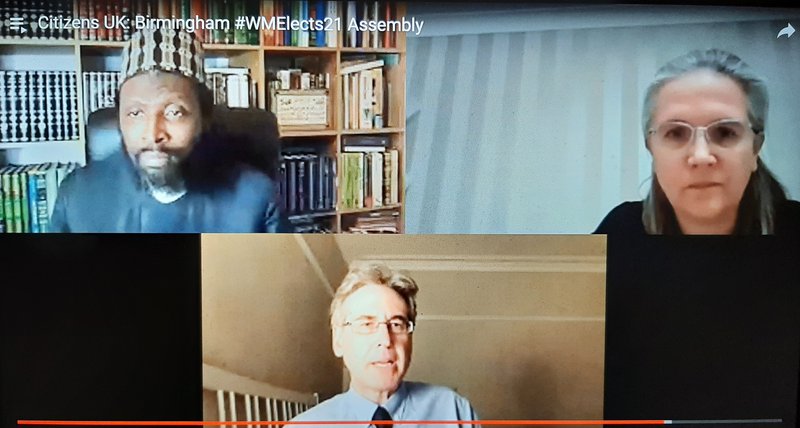 We appreciate your commitment to a relationship with us. We've set out below a summary of your pledges to our priorities as we are keen to begin work on them as soon as you settle in your offices. We look forward to our Leadership Group meeting you before the summer holidays.

Watch 3 short powerful video clips below explaining each of our 3 priorities for making families better off.

Watch Simon Foster's pledges in full to our priorities here:

‘My commitment going forward is that in the manifesto we will talk about a new housing deal with central government to be able to accelerate the pace at which Housing Associations in particular, are able to deliver those social rent homes. Currently there is not a way that that is being achieved if you look at what Local Authorities are doing, if you look at what Housing Associations are doing, it's just not achieving that.

‘…in front of everyone here I'm happy to say we do have to now lean into this having made very good progress on the underlying issues of affordable home building as I described.’

''Four years ago, I stood in your hall. You asked me if the Combined Authority will become a Living Wage employer. I said, Yes. That was done in 2020. A really good example of your influence.'

'London Olympics was not a Real Living Wage employer it was actually before that time, so Birmingham has an opportunity to be first and as a member of the strategic board, I believe that the commitment has already been given, so I believe that that will happen and that's something we will be able to be very proud of there. I would also encourage any organisation that can achieve to get that position as quickly as possible.'

'...My categorical answer to this is yes, there will be a manifesto commitment over this as well because I think this is a very unmeritocratic system at the moment and sometimes people get work experience for you might say the wrong reasons and we want to set up a region-wide clearing system so that people will be able to come in to that work experience.'

Building social rent homes isn't within the remit of the Police & Crime Commissioner.

Simon Foster on the Living Wage:

'I pledge that if I'm elected, the Office of the Police and Crime Commissioner in West Midlands will remain living wage employers and I support the West Midlands becoming a real living wage region. Paying the real living wage is the hallmark of being a good employer. It'll provide a boost to the economy; it'll provide and improve recruitment and retention. And it'll improve & it'll help to alleviate the scourge of inward poverty... I am proud to say that the legal aid law firm at which I work is a living wage employer.'

'I’ll work with Citizens UK to co-produce a pilot with a view to the provision of at least 100 paid work placements for 16-30 year olds in Birmingham. The prevention of crime is one of my big priorities, because the prevention of crime is always better than having to deal with the consequences of crime. And one effective way to prevent crime and indeed to provide for the rehabilitation of offenders is to provide young people with positive opportunities for education, skills training and gainful employment. And the availability of paid work placements will improve young people's job prospects particularly for those who might not otherwise have the opportunity to access paid work placements - that will prevent crime, protect our young people and save lives.'

Watch 3 short powerful video clips below explaining each of our 3 priorities for making communities safer.

'Misogyny' an indicator of hate crime

Watch Simon Foster's pledges in full to our priorities here

'The answer of course is, Yes! But maybe I can just broaden the answer to say that I think the last 4 years demonstrate how I understand this, because I have taken on the areas agreed with the NHS where the Combined Authority would lead on mental health provision; and that of course was around mental health in the workplace, and in those preparing for work. And I'm very pleased to say that our Thrive Into Work project which has taken people with mental health conditions and got them into the security of work has just been awarded significant new government funding as a good exemplar. So of course I would like to agree what we can do alongside the NHS in that. And it was perhaps just worth reflecting I went along to the Birmingham Youth Trends just before lockdown - actually always a very important event -and it was fascinating to me that this single issue was bigger than any other one spoken about.'

'I can give a clear answer to this and of course I would work with the incoming PCC [Police & Crime Commissioner], hopefully that will be Jay Singh Sohal then we could work very effectively together. But I have already worked effectively cross-party with the current Police and Crime Commissioner to do the hate crime campaign on public transport. And it was interesting to me that when we had the big faith conference back at the end of 2017...this was one of the priorities that was pulled out we've acted on it. We've actually seen - and you might say this is a very bad thing you may also say it's a good thing - an increase in 30% of reported hate crime on transport. But at least once it's reported it can be addressed. So I’d be very willing to take that forward in the employment area and use my contacts there to through the business community to act in a similar way..'

'It's been estimated that up to 40% of police time can be spent dealing with mental health issues of one description or another. So addressing mental ill health at an early stage will cut crime, reduce victims of crime and criminal exploitation. [It will] reduce the impact on policing and our criminal justice system; and our public services save tax-payer's money. And help to ensure that young people remain in education and have access to the mental health care they need, when they need it and where they need it; that in turn will give them the best opportunity to fulfil their individual potential and make a positive contribution to society . That is to the benefit of all of us.'

'I support your proposal that we work together to pilot hate crime action plans with employers, including the need to record and report on how they're doing, focusing on prevention. Which is entirely consistent with my own strategy that the prevention of crime is always better than having to deal with the consequences of crime, and thirdly if elected I will commit to your ask!'

Simon Foster on 'Misogyny' as a hate crime indicator:

'Making misogyny hate crime indicator will be in my Police and Crime Plan. And congratulations Citizens UK, give yourselves a round of applause, a pat on the back and three rousing cheers, you did it. You won back in 2015, in Nottingham you started the campaign for the police to make misogyny a hate crime indicator and on the 17th of March the Government conceded to amendment 87b to the Domestic Abuse Bill so that all police forces will now have to record misogyny as a hate crime indicator. I pledged my support for this back in September 2020, I lobbied my fellow Police and Crime Commissioner candidates, made a video about it with Stella Creasy. If elected, then I’ll oversee the implementation of this by West Midlands Police - that will be in my Police and Crime plan.'

BUILD A REGION OF WELCOME

Watch 3 short powerful video clips below explaining each of our 3 priorities for building a region of welcome.

Promote West Mids as a Region of Sanctuary

Watch Simon Foster's pledges in full to our priorities here

' I would like to commit to...work out exactly how we do it with you.. how we work with the sort of umbrella organizations: Walsall Together, Coventry Action and the Voluntary Services Councils in each of the areas..to work out how we bring together the offer from the DWP [Department for Work & Pensions], the Citizens Advice Bureau, community groups, charities. Those people who actually are already doing this rather than the notion of a Combined Authority or a Mayoral Service.'

Andy Street on a Region of Sanctuary:

' The answer to this is: Yes! We will do this I believe. I've already supported the work over refugee settlement and for example if you look at 2018 the work we did over 'My friendly cities' in Coventry & in Birmingham. And indeed in Wolverhampton. And so the particular question about the vulnerable persons resettlement scheme: Yes I would willingly support the extension of that because it goes to the heart, as the film said of what this place has been like for many decades if not centuries.

'On ESOL, I think we have a good record on this. We were asked a number of years ago to review this. We have maintained the full provision. We've indeed made it free to more people: extending the free level up to those earning the real living wage. And we've also of course made sure that community groups also deliver this. Very happy to examine with you, it's one of the specific asks, in the detail of exactly how this can be taken forward. And there is a balance between the transport costs and indeed the child care costs which we've discussed openly and we have chosen thus far to go for maximum participation.'

' There are four sub-parts of this and the answer is 'Yes' to all four. I believe we've worked very effectively with the wonderful Centre at [Aston] university for ethnic minority entrepreneurship over the last few years...I look at particularly what we're concentrating on helping government funding get through to ethnic minority businesses...making sure our outer education budget provides the skills for those businesses - over 70 % of it concentrated on the BAME [Black and Minority Ethnic] community and of course, what we're doing around our social enterprise growth because that is a sector where BAME leaders tend to be far more prominent than in most SMEs [Small & Medium size Enterprises]. So very happy to work on exactly what you've said and indeed last year I opened the conference. Very happy to do it every year going forward.'

'I will team up with the Mayor and others to establish a Community Advice Fund for local groups and civil society institutions to deliver advice surgeries. I’m flexible about the way we put that objective into practice, but I’m committed to the principle. My top priority will always be justice safety and security but for all the people communities and regions of the West Midlands.'