We believe that we should care for our neighbours, wherever they were born and whatever their immigration status.

We are calling for 'settled status’ for all who have made the UK their home.

Many of us or our neighbours are unable to participate in the economy, our communities or in public life because of lack of immigration status.

“Undocumented people are constantly in lockdown”, says Elsie, Campaign Co-chair and Leader from Parents and Communities Together (PACT) in Southwark Citizens.

We are asking for the Government to create a process for enabling people to settle their status.

We are asking for the Government to regularise and settle the status of people who have made the UK their home, for all who have put down roots.

Creating an earned regularisation process would provide documents for people without immigration status so that they can fully participate in their communities, and allow them to be better able to provide for themselves and their families.

It would also benefit the common good and contribute to economic growth.

There are no official figures for the number of people in the UK without documents. However, estimates are usually in the hundreds of thousands.

People become undocumented for a variety of reasons including entering the UK on a visa (e.g student or spouse) and overstaying its duration, arriving in the UK as a child to parents without settled status, being refused asylum but staying, or being unable to pay large Home Office fees.

There are currently several routes to settlement, resulting in leave to remain status in the UK, however, they are very complicated:

If you make a mistake or receive bad advice, the system punishes you, potentially putting your life on hold, and can leave you vulnerable to domestic violence, exploitation and unable to participate in the economy, in their communities, or in public life.

Why is this important?

Without status, people cannot work and cannot access basic services including most of the NHS.

They also effectively cannot access the criminal justice system, which harms women at risk of domestic violence and people at risk of exploitation and modern slavery.

This leaves people unable to participate in the economy, in their communities, or in public life. It means that people without documents cannot pay taxes or achieve their potential.

As a victim of domestic violence, my ask is about safe reporting — as an undocumented person, if you are the victim you are turned into a criminal because you don’t have the papers. You don’t have a voice. You can’t go to the police. You can’t shout for fear of being arrested, for fear of being returned back home — you have to bear the violence. Bilqis, St Mary’s CE Primary School Lewisham 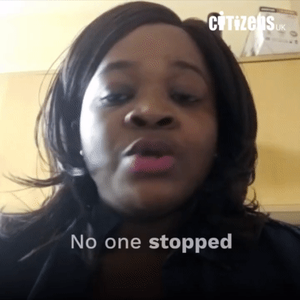 Documented or undocumented, we are all equal we are all human beings. What makes you a person with settled status different from me a person without settled status? Just opportunity and luck. We say in the Settle Our Status campaign: together we can. If we come together as one, we can always do great things. We are all one. We are human beings. Treat us fairly. Elsie Mumah, Organiser

Find out more on this podcast

The Covid-19 pandemic continues to impact many of our communities. But at the beginning of the crisis, there was uncertainty about how much it would affect our neighbours.

So we held a national listening campaign in March 2020, when the first UK’s national lockdown started.

And one of the issues that kept coming up again and again was around immigration status. People worried about being left without an income. And with no access to a safety net, many of our neighbours are at risk of being left with no way to support themselves and their families.

We set up a national campaigning team through Zoom meetings. Now, over 30 Leaders from around the country are part of our action team and nearly 10,000 people have signed our open letter to the Prime Minister.

Our belief is that together, we can settle the status of all our neighbours.

Hundreds of children in our member institutions, and thousands of others across the country, are priced out of their entitlement to British Citizenship by the £1,012 fee. Children have to pay this fee despite being born and/or raised here and even though they call the UK home. Our vision is to break down the barriers to children accessing their legal entitlement to citizenship, to turn #ChildrenIntoCitizens. As a first step, we are calling on the Home Office to reduce the £1,012 application fee that prices many children out of their entitlement to British Citizenship.

Read more about the campaign to reduce child citizenship fee.