In 2009 our listening campaign revealed stories of families – including children – who had been locked up in detention centres. At that time, over a thousand children a year were being detained in prison-like conditions.

Leaders from across the country decided to organise to stop children being detained for immigration purposes. In the run up to the 2010 General Election, Organisers trained teams of Leaders in constituencies across the country to sign the Sanctuary Pledge. This was a promise to end child detention and write to their party leader to come to the Citizens UK General Election assembly.

A few weeks before the election, 2,500 people gathered at Methodist Central Hall in Westminster to hear the leaders of each party respond to our asks, including ending child detention. Future Prime Minister David Cameron and future Deputy Prime Minister Nick Clegg agreed.

Once the coalition Government was formed, Citizens UK leaders, including Barbara Nalumu, Zrinka Bralo, Anna Rowlands, and Louise Zanre, worked with the Home Office to negotiate an end to child detention. 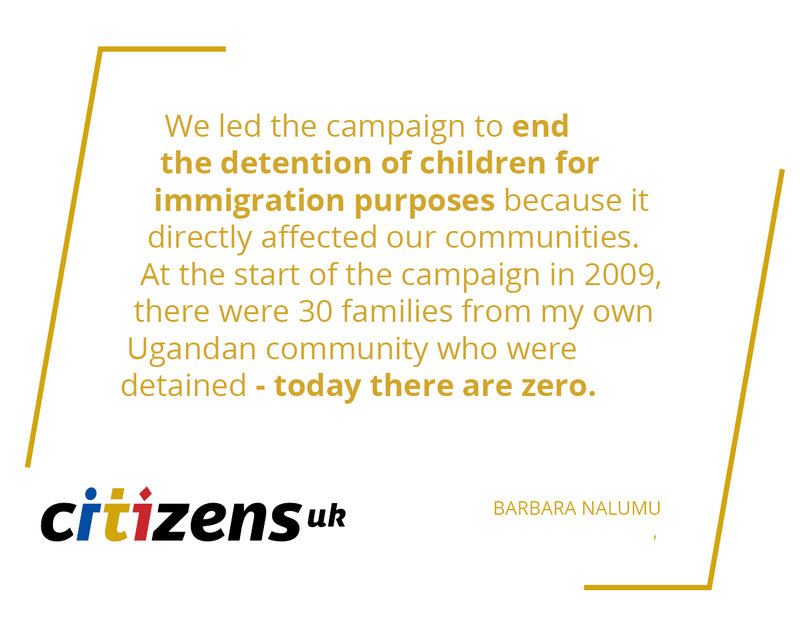 On May 14, 2014, the end to child detention was written into UK law. This reflects the progress that the Government has made since 2010 in ending the practice of locking up innocent children with their families in removal centres such as the notorious Yarl’s Wood.

Ending child detention was one of our successful campaigns. We have lots of other ongoing campaigns that you can get involved.