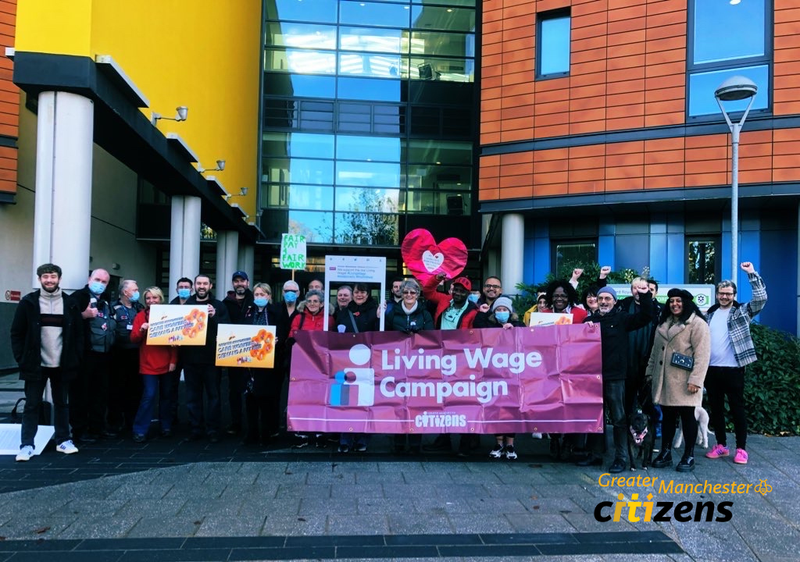 Greater Manchester Citizens and Salford Unison were delighted to win the real Living Wage for social care workers across the country with a massive £19 million pay rise after a public action outside Anchor Hanover Care Home in Salford at the beginning of Living Wage Week (15-21 November).

Anchor Hanover, the largest provider of specialist housing and care for older people in England, announced they will be paying care workers the real Living Wage from this month.

This means employees will be paid the current real Living Wage rate of £9.90 an hour, which is almost £1 more than the current National Minimum Wage (NMW), which many on the lowest pay at Anchor Hannover were on. The huge uplift has meant that up to £19 million a year will be put back into the pockets of employees at the care provider, ensuring that they get a fair day’s pay for a hard day’s work.

Although this is a big win, they have not yet officially accredited with the Living Wage Foundation. By taking this next step and becoming an accredited employer ensures they will continue to pay the real Living Wage rates as they increase year on year, holding them accountable.

The campaign began in Salford, where the Council led on becoming the first Living Wage City and granted extra funding to guarantee full pay to care workers who were self-isolating, as well as extra money to give local care workers a pay rise. However, Anchor Hannover was one of the few social care providers not to take up the offer, despite it costing them nothing.

The local action in Salford was attended by care workers, the local MP and councillors, as well as Greater Manchester Citizens member institutions such as mosques, churches and food banks.

At the event, care workers spoke about how difficult it was to get by on the NMW, with one care worker revealing that she had sold her car to make ends meet. 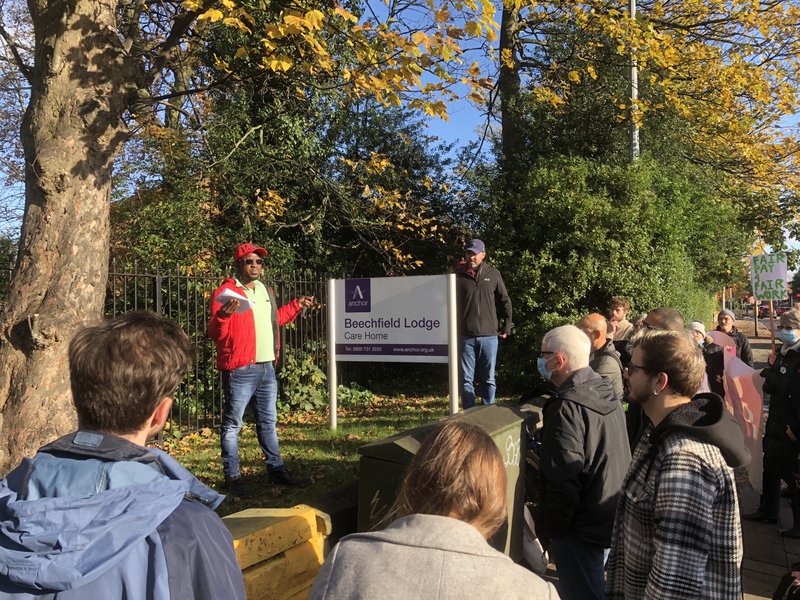 After the announcement, one relieved care worker said: “This will help me pay my bills because prices have gone up so much. Hopefully it will help me go on holiday and enjoy life.”

Speaking of the announcement, UNISON’s Salford city Branch Secretary Steve North who co-chaired GM Citizens funding assembly said: “This comes off the back of a sustained campaign from Salford city branch and UNISON North West.

“Through a combination of Organising with workers, relentless direct protest and determined political lobbying, we have shown that those who deliver care and support can have a powerful voice.”

“This is a tremendous victory for the care workers, the Salford Unison branch and the local community in Salford who have been campaigning for many years for better pay for those on the frontline. Citizens UK have been calling on the Government and National Care Providers to do the right thing by those who do such an important job in our society and ensure fairness and dignity to all. We will continue Organising in Greater Manchester until everyone is paid a real Living Wage, given the dignity they deserve.” Furqan Naeem, Community Organiser for Greater Manchester Citizens

Get involved in our Living Wage for Social Care campaign

The data, with a sample of 110 care workers, showed that financial insecurity was felt by an overwhelming number of respondents: 73% said they were struggling to afford their day-to-day essentials like food and bills, whilst 87% said they worry so much about money that it affects their everyday life.