78% of low-paid workers say this is the worst financial period they have ever faced.

The cost-of-living crisis combined with low wages is hitting Britain’s lowest paid workers harder than anything they have faced before, including the Covid-19 pandemic, new research by the Living Wage Foundation reveals just a week before the new Living Wage rates are announced on 22 September.

Polling of over 2,000 workers earning less than the real Living Wage, by the Living Wage Foundation and Survation, found 78% of low-paid workers say this is the worst financial period they have ever faced. The situation is so bad that almost half of low-paid workers (42%), 2m workers nationally, are now regularly skipping meals due to financial reasons, up ten percentage points since January 2022 alone.

Over half (56%), an estimated 2.7 million workers, report using a foodbank in the last 12 months. Of these low-paid workers who were already using foodbanks, 63% – an estimated 1.7m people – said their use had increased during this time.

To date, the campaign for a real Living Wage has secured up to £1.8bn of increased wages, around 45% of which has been in London.

The Making London a Living Wage City project is working to lift those in the Capital out of in-work poverty, putting £635m back into the pockets of low paid workers over the next four years. Despite the growth of the movement, low pay remains a big issue, with 17.2% of jobs in London paying less than the real Living Wage - 700,000 jobs in total. Additionally, nine of the 25 Local Authorities with the highest levels of below Living Wage pay are in London. 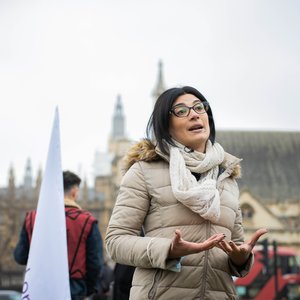 London was already an expensive city to live in, but the cost of living crisis has made getting by tougher than ever. The prices of everything from groceries to heating has continued to rise extortionately – bills keep going up, but salaries haven’t. As someone who was previously not on the real Living Wage, I do not know how I would have got by during these times. Workers need a real Living Wage – it’s never been more urgent than it is now. Anna Libera, a Citizens UK leader from London,

The impact of low pay on workers in our communities reaches every corner of their lives. People are unable to afford the bare necessities, let alone unexpected costs like a trip to the dentist or new school shoes for their kids. It simply isn’t right. We need all employers to step up and do the right thing by paying their workers a real Living Wage. If workers are providing a hard day’s work, don’t they deserve a fair day’s pay? Nicola, Citizens UK leader from London

Civil institutions such as religious communities are seeing first-hand the very real effects of low pay and the cost-of-living crisis on workers and their families. This research unfortunately confirms the sacrifices people we know are already being forced to make, with some choosing between heating or eating, not to mention struggling to pay for necessities like rent. People shouldn’t be choosing what basic need they have to cut back on – it’s simply not right – and it doesn't have to be this way. We don't have to wait for someone to make people do the right thing; rather employers themselves must step up and give their workers the dignity of a real Living Wage. Revd Dr Simon at Bloomsbury Central Baptist Church and Citizens UK leader

Get involved to make London a real Living Wage City