In Conversation with Nirushan Sudarsan

In Conversation with Nirushan Sudarsan

Nirushan Sudarsan is a young leader working with our Wales chapter, Cymru Wales Citizens. We chatted to him about his Community Organising journey and his advice for those who also want to make a change. 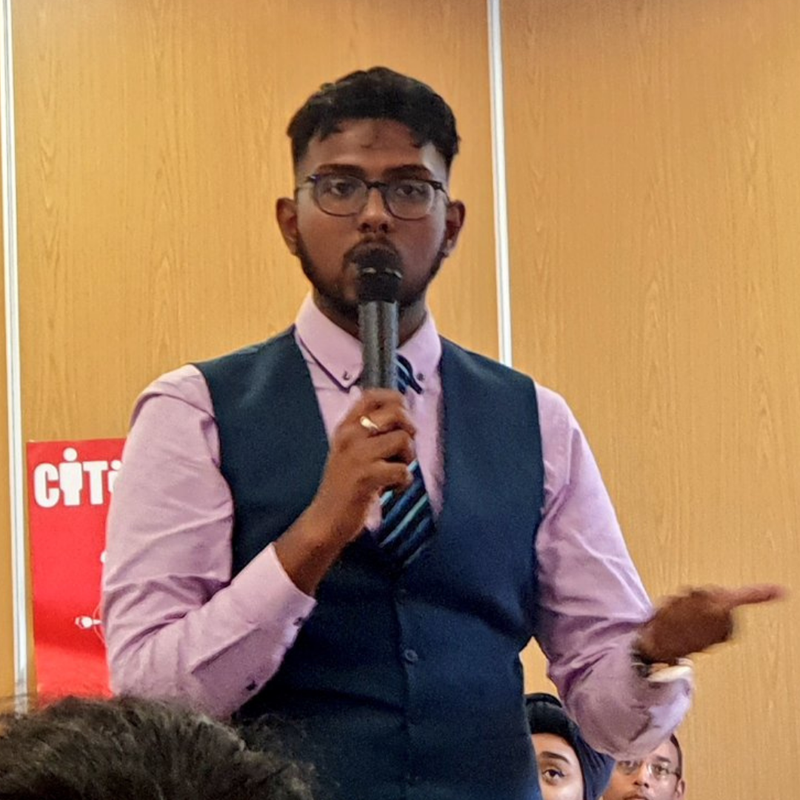 Tell us a bit about yourself and what inspired you to start Organising in your local community.

When I was 16, a friend of mine who was part of Cymru Wales Citizens invited me to steward an Assembly for the First Minister [of Wales]. And I was like, “Yeah, sure!” but he didn't explain what it was at all. Before then, I had never seen local people have these decision-makers [from the Welsh government] in the same room as them, asking them questions.

Employment opportunities, crime, mental health, education - these issues kept on coming up, and it was all linked to inequality. I thought, well, I can't just sit here after hearing people working three or four jobs just to make ends meet, or young people struggling to find work after graduating from university.

What have been the challenges you’ve faced Organising during the pandemic?

Fiona [one of Cymru Wales Citizens Community Organisers] and I had a conversation about this and Organising more broadly. We were discussing how theory and training grounds the work we do in a wider context, where you feel like you're a part of something bigger. Even though our methods are traditionally delivered through in-person interaction, doing it online isn’t a problem – it can be just as powerful.

You know the Citizens saying - action to campaigning is like oxygen to the body! If you don't take action, it just becomes this repetitive process where you feel like you're not getting anywhere.

In some ways, it's been hard to adjust, but we have had successful actions online. Our Assembly was really powerful and we've been able to do simple actions. It's just about keeping up that dialogue with people in the community through 1-2-1's and in-depth conversations – even if it is virtual! I've met more people in the last year than in the past three and it’s been good to meet Leaders nationally, too.

It's so important to keep these connections up because when you lose that relationship it’s hard to get people to commit to tackling the issues our communities are facing.

What issues are you campaigning and Organising on?

The local Welsh government and Police and Crime Commissioner elections have just been held. They’re both very different elections but really important; no one ever really thinks of a police officer being elected. The election is around the police’s priorities for the next few years, and we're thinking about working with the Police and Crime Commissioner around how we can build better relationships in the community.

There are issues like stop and search we need to talk about. Even during lockdown [in Cardiff], I have heard so many stories of young boys my age being pulled over for no reason. We need to think about preventative steps to this so young Black men and other men from ethnic minorities aren’t being stopped at disproportionate rates.

The government will have a huge amount to do in Wales no matter who gets elected, and we want to work with them to ensure the best outcome for our communities.

During your time as a Citizens Leader, what have you learnt?

The first thing is really listening; it's such a skill we take for granted. Most people in theory know how to listen, but do they do it well? Before working with Citizens UK, I didn’t understand the importance of understanding people's journeys. You only get that real sense of who someone is through listening.

Who has inspired your Community Organising journey?

Martin Luther King and Malcolm X have always really inspired me. They led a generation and found a way to make effective change within the most difficult conditions. I also read a lot about Nelson Mandela’s struggle and the apartheid in South Africa. I grew up striving to make a real change just like them.

I’d say my biggest influence would be Ali [Abdi, one of Citizen Cymru Wales Community Organisers]. I never knew he existed before I joined Citizens, but it feels like he knows everyone and everywhere in Cardiff! Hearing and learning from him has made me who I am today. Truthfully, without his influence, I don't know where I'd be now.

What advice would you give for someone who is just starting out campaigning and Organising?

Find out what you’re passionate about changing. What matters to you and what are the issues that you care about?

Once you think about why you want to make that change, you can find leaders – people in your local area, school, university or other organisation. Who are the people you see doing great work and are they working on something similar? Approach them, start that dialogue, because more often or not they'll know other people connected to the very same issues you care about.

It really helps by having and building a relationship with someone who is already Organising, like other leaders and hearing their experiences. It’ll empower you to get involved and share your own!

When beginning your Community Organising journey, don't be afraid to ask questions - I still have so many! Take every opportunity to learn more about Organising and don’t be disappointed or disheartened if things aren't going the way you expect to straightaway.

You won't win everything you set out to and you might have to compromise here and there to achieve change, but that's okay – it's part of the journey.

We believe that community leaders are made, not born

Every year Citizens UK trains hundreds of people how to turn their anger into action for change through Community Organising.